"Raymond's prose often lights up the poetry-circuits of the brain.” —Seattle Times 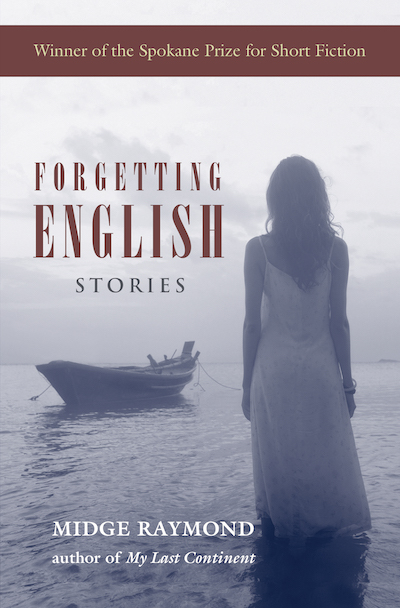 “Raymond's prose often lights up the poetry-circuits of the brain, less because of lyrical language and more due to things that work as both literal and symbolic nouns: stolen rings, voice-mail messages gone astray, heavy-footed humans in the middle of fragile habitats.”

“All of her stories are heartbreakingly honest ... I wouldn't be surprised if she started getting compared to Alice Munro or Jhumpa Lahiri."

“Raymond has quiet, unrelenting control over the writing; each story is compelling and thrives because each detail and line of dialogue reveals just a little more about the characters and the evocative settings."

“In her impressive debut collection, Forgetting English, Midge Raymond sets her stories in a variety of locations outside the continental United States...Alongside personal, human histories, Raymond incorporates larger traditions. Marriage rites. Fertility symbols. The meaning of jade. The natural history of the penguin."

“Using taut language, straightforward plots that give a sudden twist, and unflinching characterization, Raymond brings us face to face with people once sure of themselves, now unsure; once standing on solid ground, now they are rocked out of complacency or dormancy of their desires, and brought back to life, hard and fast. They are no longer secure, but they are more alive than before..."

"Midge Raymond’s exquisitely written stories turn on relationships, and not just of one kind — between lovers, yes, but also within families, between sisters, among friends, or forged in chance encounters with strangers — and the turning often occurs in moments when the utterly mundane had abruptly conjured itself into crisis….Raymond’s eye for telling detail is very fine, as one expects of an accomplished writer, but to this she adds the informing eye of a natural historian of place.”

Winner of the Spokane Prize for Short Fiction

“Raymond skillfully uses the resources of place, culture, and language to reveal the complications of the heart and the complexities of human character and circumstance."

In this new, expanded edition of her prize-winning collection, Midge Raymond explores the indelible imprint of home upon the self and the ways in which new frontiers both defy and confirm who we are. Forgetting English takes us around the world, from the stark, icy moonscape of Antarctica to the lonely islands of the South Pacific, introducing us to characters who have abandoned their native landscapes only to find that, once separated from the ordinary, they must confront new interpretations of who they are, and who they’re meant to be. 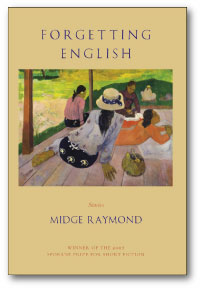 Second edition published in 2011 by Press 53 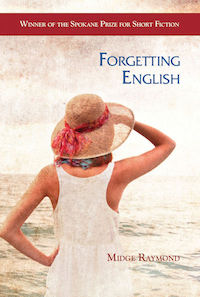 "Raymond's style of writing is engaging, her locations exotic...and what her stories express about travel and exploration is honest and forthright."

“Midge Raymond turns her elegant, austere sentences precisely, forcing unmediated, intimate connection with readers of her exotic tales. It's nothing short of style-alchemy, spare tales and lean words and stark characters sculpted so articulately they whisper the secrets of pure language itself. Raymond will be noticed; she's written at a height of elegance and authenticity that no teacher can quite bestow, but that any reader will feel. Forgetting English reminds us why we read new writers.”

“When you forget English, you might learn to speak the forbidden language of your sister’s Tongan lover — you might find you understand the sweet murmur of the Gentoo and the ecstatic cry of Emperor Penguins. When the man you saved from the sea chooses the icy water a second time, you may bend to the universal posture of grief, recognizing the way your body echoes a bird’s in a wild communion of sorrow. Midge Raymond’s stories are a revelation and a delight, a journey from the frozen desert at the bottom of the world to the lush rainforest of Hawai’i. Prepare yourself to think in Chinese, to start over, to reveal your worst crime and discover you are a stranger to yourself, born again into a world where all things become wondrous and new, terrifying and possible.”

"Forgetting English is an exquisite thematic collection of short stories...Raymond’s masterful prose transports the reader to various locales including Antarctica, Japan, and Tonga, to name a few."

“Midge Raymond will soon become one of your favorite authors."